A recent addition to the lawn bowling scene, Bill had a very active and successful season. He led his team to a win at the district mixed pairs championships and a spot in the Eastern Ontario regionals where they won a silver medal, narrowly missing the gold by one point.

LAWN BOWLS – KAREN OATMAN:Karen is a bowler who plays out of the Galetta Lawn Bowls Club in the City of Ottawa. She represented District 16 in  four provincial finals. Her triples team won their first 3 games and competed in the gold medal game played in Smiths Falls. Karen was also the district singles player who competed in the provincial championships that were held in Woodstock, Ont.

Competing in the men’s pairs category, Rob skipped district 16’s only gold medal-winning team to qualify for the Canadian Lawn Bowling Championships in Winnipeg. After winning the district title and going undefeated at the Ontario Championships, Rienzo and teammate Zack Steele placed 9th at the nationals. Rob also skipped the team of David Jefferies, Gerry Laporte and William Smalluk to the men’s fours district team championship and a provincials berth.

2014 District Bowler of the Year and OLBA Volunteer of the Year Award presentation to Alice Keiwan of the Nepean Lawn Bowling Club.

As everyone in the District and the OLBA knows, Alice has been a hardworking volunteer for many years, spending much time and effort on a number of projects for her club and for the District.  In particular Alice has spent many hours ensuring our bowling calendar is ready to go as soon as we are ready to start bowling each spring.  She is also a very proficient bowler and competes successfully at club, tournament and competitive levels. The awards from the District and from the OLBA  are well deserved.  Thank you Alice. 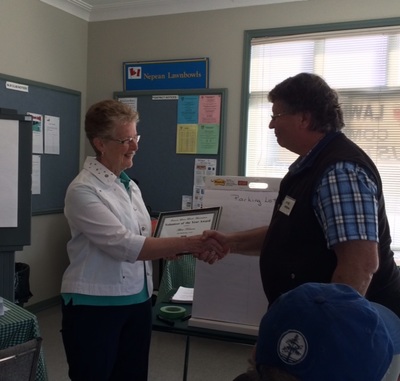 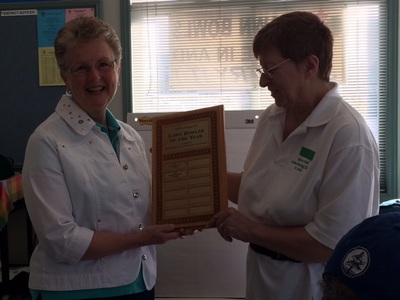 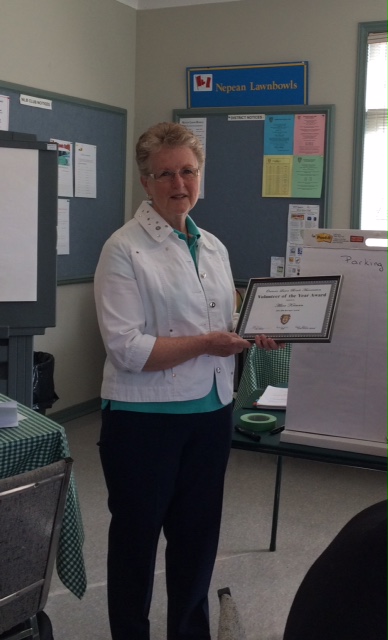 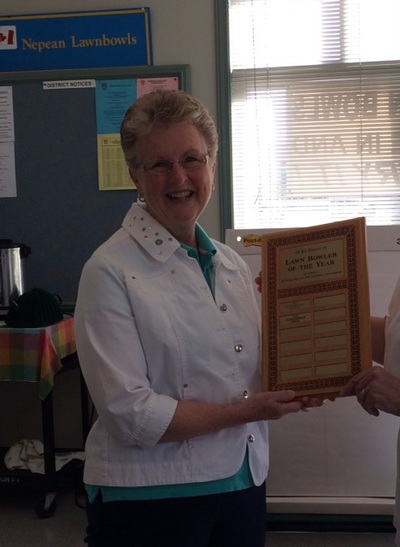 Whether as an individual or a team member, David was very successful on the Ottawa and Ontario lawn bowling scene last summer. He represented District 16 at the provincial men’s singles championship and won four of his six matches to reach the final, earning the silver medal. Playing with teammates Grant Fletcher and Malcolm Rose, David was the vice for his bronze medal-winning District 16 team at the Ontario men’s triples championship. During the Governor General’s championship matches between Ontario and Quebec, David skipped his Ontario four-man team to victory.